What is the difference between necrosis and apoptosis?

Cell death is a naturally occurring phenomenon in multicellular organisms. Cells die as a result of internal and external stimuli.

A number of cell death events have been identified (PMID: 29362479; (1)). They are classified into two groups: programmed/regulated cell death (most commonly known as apoptosis, but also autophagy & necroptosis) and accidental cell death due to non-physiological states such as infection or injury (necrosis). 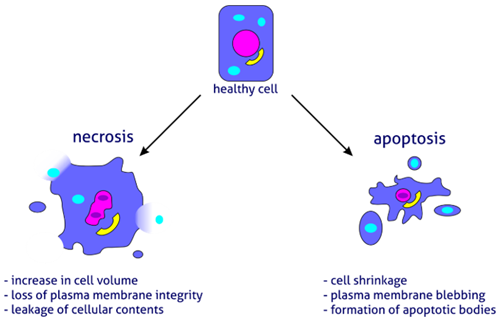 What is apoptosis? Apoptosis is the most common form of programmed cell death. It can be triggered via various physical, chemical, and biological factors, and its cellular response is tightly regulated. The controlled degradation of cellular components that occurs during apoptosis is regulated by caspases, which are a family of proteases activated during apoptosis (more details here: Caspase family).

There are two main receptor types for externally induced apoptosis. Death receptors (e.g., TNF, Fas receptors) bind their extracellular ligands (TNF-alpha, FasL – Fas ligand, respectively). This prompts their activation and assembly into complexes, leading to the activation of intracellular caspases. The other apoptotic receptors are called dependence receptors (e.g., DCC and PTCH1), which on a completely opposite sensing mechanism. In physiological conditions, they respond to trophic factors and act as an anti-apoptotic stimulus. However, when their ligand falls below a certain level in the extracellular space, ligand-free receptors trigger the apoptotic response.

Apoptosis is reflected in significant cell morphological changes (Table 1). In the earlier phases, a cell undergoing apoptosis loses cell contacts and changes shape. Chromatin condenses in the nucleus and moves toward the nuclear envelope. Condensation of the nucleus (pyknosis) initiates DNA degradation. Loss of water results in significant cell shrinkage and blebbing of the plasma membrane with little or no morphological changes to the other cellular organelles. Phosphatidylserine, a lipid present only in the inner layer of the plasma membrane, is now also visible in the outer layer. Nucleus and cytoplasm fragment into apoptotic bodies. Released cellular proteases lead to disintegration of the cellular skeleton, membranes, and proteins. Neighboring macrophages recognize, engulf, and digest apoptotic bodies, completing the process.

What is necrosis? Necrosis is a form of cell injury defined as unregulated cell death resulting from internal or external stresses such as mechanistic injuries, chemical agents, or pathogens. The process is usually rapid and leads to cell swelling (oncosis) and bursting due to loss of osmotic pressure (Table 1).

During necrosis, the loss of plasma membrane integrity induces cellular contents to escape to the extracellular space, causing inflammatory responses. Cell disintegration is preceded by a series of morphological changes, including disruption of cell organelles, such as swelling of the ER and mitochondria, or decay of the Golgi apparatus. An influx of calcium ions from the extracellular matrix activates intracellular nucleases that fragment DNA. Freed lysosomal hydrolases contribute to the degradation of nucleic acids and proteins. Decay products activate leukocytes, lymphocytes, and macrophages that phagocytose the remnants of dead cells.

Necroptosis is a form of regulated cell death that produces necrotic phenotype. It arises in response to stress stimuli (PMID: 19524512; (6), 19524513; (7), and 19498109; (8)) such as interferons, death ligands, or Toll-like receptors. Activation is mediated through protein 3 interacting receptor (RIP3, also known as RIPK3), a serine-threonine kinase (Figure 4). Cells in the initial stages of necroptosis are characterized by RIP3 phosphorylation and commonly β-amyloid-like protein complex formation with RIP1, known as necrosome. Phosphorylated RIP3 acts downstream by phosphorylation of MLKL (Figure 5), which causes necrosis by a mechanism that is yet to be fully understood (PMID: 30131615; (9)).

Autophagy is a natural degradation process of cellular contents during nutrient stress. In the case of macro-autophagy, it involves the formation of double membrane vesicles called autophagosomes that fuse with lysosomes to form autolysosomes. This process is initiated by the mechanistic target protein of rapamycin (mTOR) and autophagy-related genes (Atgs) proteins (Figures 1-2). Autophagy promotes cell survival, providing starved cells with nutrients obtained through the digestion of non-essential cellular components.

It was discovered that macro-autophagy can also be one of the routes for programmed cell death (PMID: 22052193; (2)). Although significantly less common than apoptosis, it plays a role in regulating some developmental processes. The most well known is the removal of certain larval organs – the salivary glands and midgut – in Drosophila melanogaster during larval–pupal transition (PMID:18083103; (3) and 19818615; (4)). Autophagic cell death was also observed in in vitro cultures of adult hippocampal neural cells in response to insulin removal (PMID: 18653772; (5)). The main characteristic of autophagy-dependent cell death is extensive autophagic vacuolization of the cytoplasm, with no changes in chromatin organization as seen in apoptosis (Table 1). Also, cell remnants are not cleared by macrophagic phagocytosis as observed in apoptosis. Autophagy leads to autophagic cell death that can be blocked by inhibitors or the depletion of Atg proteins (e.g., Atg1, Atg5, Atg7) (Figure 3).

The two main types of cell death are apoptosis and necrosis. They differ in terms of the stimuli that initiate cell death processes, morphological and biochemical changes, and in the signaling routes used by cells.

Necrosis is caused by external factors that lead to irreversible cell injury, with loss of plasma membrane integrity and rapid death often resulting in activation of the immune system. In contrast, apoptosis is initiated by a number of internal and external routes; it is a well-controlled process that results in the slow turnover of cell remnants and phagocytosis by neighboring macrophages.